Sushi Safety at Home or in a Restaurant

Japanese-style foods are becoming increasingly popular with the most common dishes being sushi and sashimi. Sushi is traditionally made with vinegar rice, seaweed wraps, vegetables, raw seafood, and occasionally cooked seafood. Sashimi is a dish of raw seafood served on its own. Eating sushi and sashimi is risky, especially if precautions aren’t taken, because you’re consuming raw foods. Raw seafood may contain different parasites, viruses, and bacteria which make it very important to take steps to prevent foodborne illness. These precautions are to be used in a restaurant AND when attempting to prepare sushi at home. 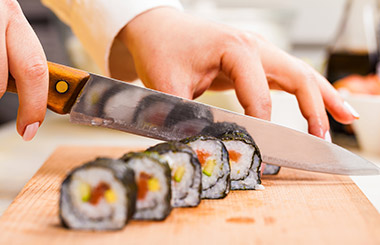 In the past, most foodborne illness associated with sushi has been caused by Vibrio parahaemolyticus, Staphylococcus aureus, various types of Salmonella, Listeria monocytogenes, and parasites, such as Anasakinae and Diphyllobothrium.

Who Should Avoid Sushi?

There are certain species of tuna that don’t need to be frozen prior to being eaten raw, such as:

When preparing sushi dishes, a large amount of food handling is involved from preparing the rice, vegetables, and seafood, to making the dish and preparing the rolls. It’s important to be aware of cross-contamination because of the handling of raw and cooked foods.

Prepared rolls should be refrigerated if not being served immediately. Rolls intended to sit at room temperature must not be out for more than 2 hours.