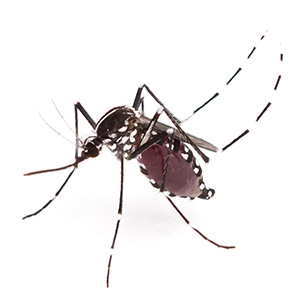 The Aedes albopictus mosquito is a tropical mosquito that is part of the Aedes species which is capable of transmitting Zika virus.

Although this species of mosquito, also known as the Asian tiger mosquito, is capable of transmitting viruses including Zika, it is not the species that is responsible for the majority of human cases of Zika virus infection in the Caribbean, South America and Florida. That species is the Aedes aegypti mosquito.

Aedes albopictus has been identified across the United States, including Vermont, New York, New Hampshire and Massachusetts. It was first documented in the United States near Houston, Texas, in 1987 and spread rapidly through the southern United States and up their eastern seaboard.

Since Ontario started trapping mosquitoes for West Nile virus (WNv) surveillance in 2002, three Aedes albopictus were found in 2005; with one each from the health units of Ottawa, Peel and Toronto. One was found in 2012 near Amherstburg. The Aedes albopictus captured in Windsor-Essex County in 2016 were caught at the end of the mosquito season as part of Windsor-Essex’s surveillance program for WNv. Its expansion is limited to areas with suitable temperatures that can allow it to survive.  Our cold winter temperatures would prevent the mosquito’s ability to survive here.

The biting behaviour of the Aedes albopictus is different than the Culex pipiens that transmit WNv in Ontario. It is an aggressive daytime biter, with peaks in activity in the early morning and late afternoon. These mosquitoes do not breed in ponds, puddles or marshes. They typically lay eggs in and near standing water in items such as buckets, bowls, animal dishes, flower potters and vases. It is important to change water regularly, especially in pet dishes and water in bird baths.

The best way to prevent diseases spread by mosquitoes is to protect yourself and your family from mosquito bites. Individuals can do so in several ways: